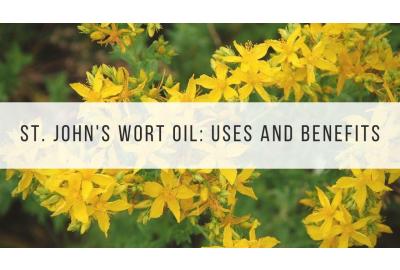 Originating in Europe and subsequently successfully cultivated in many parts of the world, including Asia and America, St. John’s Wort is a flowering plant in the Hypericaceae family. It was named after St. John the Baptist, as its bright yellow flowers would bloom and be harvested around his birthday on 24th June.

St. John’s Wort is well-known for its benefits in traditionally treating mood and emotional disorders, such as mild to moderate depression and anxiety. But what about its use and benefits when applied topically in skincare?

While the plant’s leaves are most often used for internal medicinal use, St. John’s Wort oil is created by infusing the fresh flowers in a neutral base oil, such as Sunflower or Olive oil. When applied topically, this oil is said to have many benefits for the skin and muscles.

St. John’s Wort oil can be used to soothe dry, itchy and eczema-prone skin, while improving the skin’s elasticity and hydration. When massaged into the skin, it is believed to help decrease the appearance of scars.

One of St. John’s Wort’s most common topical uses is aiding in the healing of minor burns, wounds and bruising by aiding in the skin’s regenerative process and stimulating the circulation of oxygenated blood to damaged cells. St John’s Wort flowers are rich in flavonoids, with the constituents hypericin and hyperforin believed to contribute to the plant's anti-inflammatory, anti-oxidative and antimicrobial properties. The anti-inflammatory effect of the oil is used to help ease the pain of arthritis, muscle aches and joint pain, while the antimicrobial properties have led to interest in St John’s Wort being used to treat herpes simplex infections.

Why We Use St. John’s Wort Oil in our Massage Waxes

We add St John’s Wort oil to our ‘Sports’ blend of Massage Wax and Liquiwax, as well as our Fascial Release Waxes and our Cooling & Soothing Balm. These waxes are some of our most popular blends for sports massage, where treating muscle aches and minor skin bruises/abrasions is a more likely occurrence. We’ve added St. John’s Wort oil to these particular blends for its anti-inflammatory properties, thus complementing the massage treatment.

St. John’s Wort can cause photosensitivity (sensitivity to the UV rays from sunlight and other light sources), and can interact with several medications. While these effects are most commonly associated with consumption of St. John’s Wort, such as in capsule form, it’s always best to consult with a healthcare professional if you have any concerns before using St. John’s Wort topically.